Although no definitive end of life has been announced for Skype for Business, now is a great time to start exploring Microsoft Teams.

What are Microsoft Teams?
Microsoft Teams is a fairly new effort by Microsoft to create a greater sense of synchronicity and collaboration between applications and usage. Teams make it easier for users to collaborate in real-time, using a variety of different tools and back-end features.

Teams includes many of the familiar features of Skype, as well as some additions:

So, how do I enable Microsoft Teams?
Enabling Teams can be enabled via standard licensing by user(s) or groups of users thru the Users | Active Users view in Office 365 tenants or via PowerShell (works the same as enabling or disabling other Office 365 subscriptions and applications).

Enabling Microsoft Teams
You can manage licenses for Microsoft Teams directly through the Office 365 Admin Center using the steps below. Teams is typically available with bundled Office 365 licenses including Business Essentials, Business Premium, E3, E5 and others.

4. Select the product licenses, then click on Edit drop down menu. 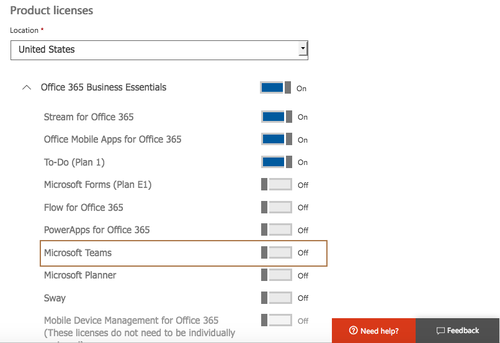 Scroll down to the Microsoft Teams option. Click on it to enable it. (Similarly, if you are trying to disable teams, simply click it again so the functionality reads as “off”). Then click Save. 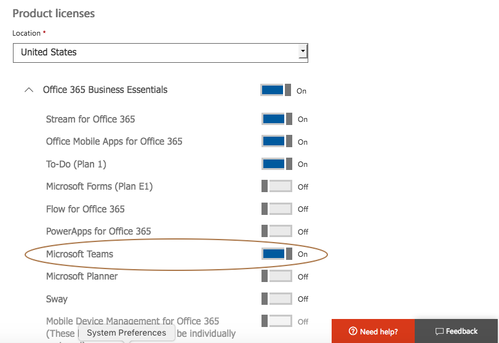 Enabling Teams for multiple users at a time.
Enabling Teams through the Office 365 Admin Console is a great method if you have a small number of users who require Teams to be enabled. However, if you have hundreds of users who need access, PowerShell can be used to enable the licenses similarly to enabling other Office 365 licenses or applications.

We hope you find this helpful!
Posted in FAQFriday
Tagged with Microsoft Teams, office 365, Exchange Online